Inspiration
An Alta skier gives us another reminder of the power of accomplishment.

About five years ago I wrote about post about one things I’d change about trail maps.

Specifically, I suggested one small addition to the way we list runs either on the map or in a legend. Instead of just listing the names, the idea was to insert a little checkbox next to one as well (like that graphic above suggests).

It was based on a couple ideas. First, was this tweet.

This young man and his dad just finished skiing all 155 Killington trails, possibly the first Pre-K student to do it. pic.twitter.com/pfLVR5D91I

Second, was my own effort to do the same with a Beaver Creek trail map and pink highlighter. 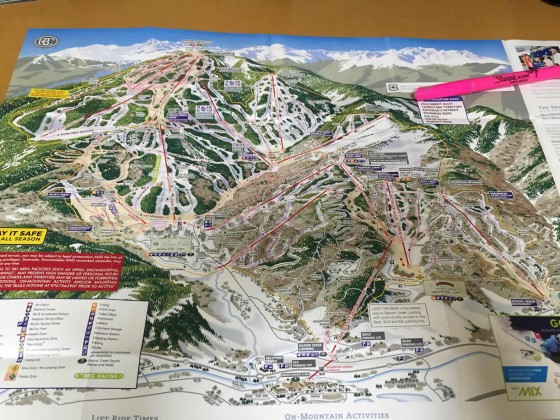 I argued that this did three things:

That word is one I’ve talked about over and over during the 10 years I’ve been running SlopeFillers. Accomplishment is a powerful thing, but it’s not always easy to find in skiing because skiing isn’t as tangible or quantifiable as other sports.

Skiing doesn’t have a finish line.

Another Example
I’ve always believed this desire to ski every run or ride every lift or ski 100 days help power. But then, just a few days ago, I saw this.

I've officially achieved my 2019-2020 #ski goal, to ski every marked run at @AltaSkiArea after my thrilling skin up and ski down the incredible Mt. Baldy Main Chute. Enjoy this blog post telling the whole story: https://t.co/YT8QooVEL4 #altamagic #altamagic2020 #hikedotski pic.twitter.com/CvcE8BE2Xx

Yes, a skier was trying to ski every run – with a pink highlighter to boot – and he hiked the resort after it closed to achieve his goal.

Maybe you don’t need to put checkboxes on your trail map, maybe all you need to do is plant that little seed and let the motivating powerhouse of accomplishment do the rest.