Growing Skiing
Twenty years ago bowling tried (and failed) to accomplish the same thing skiing is.

I’ve been fascinated by a marketing story for quite a few years now. It’s a story of ups and downs, young and old, signs of life and signs of danger.

The story, perhaps surprisingly, is bowling’s.

If we could travel back in time to the early 90’s, we’d see a sport whose leadership was holding conferences very similar to skiing’s today. As one LA Times article put it, bowling was:

“Dependent on the dwindling ranks of the World War II generation.”

It should. Their solution should also ring a bell.

Yes, bowling industry leaders knew they needed to infuse their sport with young blood and decided to build something custom designed for this generation. So in 1995, Brunswick introduced strobe lights and music and DJs at 120 alleys across the country.

“Center managers say they’ve got lines out the door 15 minutes after the pop tunes start. Bowling Inc., an industry association, reports that the number of Americans bowling is at an all-time high.”

But there was a problem. Actually, there were two.

First, none of these younger bowlers were bowling during the day. So, yes, more people were bowling, but they weren’t becoming bowlers.

The second concern was even more fundamental. Bowling analysis worried the trend wouldn’t last. That, for lack of a better word, it was only a fad.

Fast Forward
One of the interesting parallels between skiing and bowling are the similarities between season passes and bowling leagues.

In a word, both of these things measure conversion. They measure people who don’t just participate, but participate regularly enough to join some core group of people who make the sport at least some part of who they are through the volume of their participation. People who become rather than just do.

Brunswick launched cosmic bowling in 1995. Here’s what happened next.

The silver lining is that unique bowlers did go up. Quite a bit in fact. And they were able to maintain it for a number of years. But then, as quickly as the numbers spiked, they dropped. 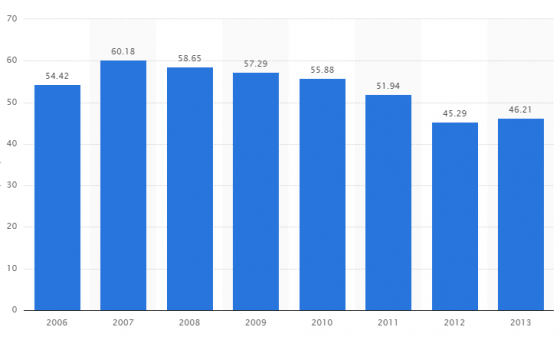 From 2007 to 2013 bowler numbers sunk 23%. Makes our flat numbers look a little better after all. The big worry that these bowlers were only coming for the “cosmic” and not for the “bowling” turned out to be prophetic.

They came for the lights and dancing and loud music. But once that phase of their life passed, so did the bowling.

The Ski Approach
When you take the lessons within that story and put them in the form of the a question:

What has skiing built specifically for the younger generation to increase participation numbers?

It’s hard to answer that question without saying the word “terrain park” in your answer.

And within that thought I want to ask three questions.

Question #1
First, do we see any signs that terrain parks are a long-term solution to creating skiers, not just customers? I’m not pretending to be asking a unique question here. We’ve all wondered this. I’m simply asking it again in the context of another industry that tried the same thing and, as far as I can tell, failed.

The other two questions go hand in hard.

Question #3
And, finally, what would happen if we spread some of that effort and creativity (and lessons learned) across the rest of the mountain?

Often wonder what'd be built if the same time, creativity, and resources used on terrain parks were applied to a trail for everyone else.

Even if terrain parks are ultimately a failure, I don’t think it will have been bad to try. Experimentation is often found within healthy industries. So even trying things borrowed directly from sports like bowling carry valuable lessons once implemented.

How cool is this? Cosmic tubing at @skibowl! How this winter compares to last, next at 6 @fox12oregon. pic.twitter.com/nZMfY36Z6o

But I think we have to ask ourselves tougher questions about the success of these efforts so far. Because for every resort that fills 2,000 room nights with USASA parents, there is a massive jump line used only by the park crew while thousands of skiers search for a new way to ski the same old groomer.