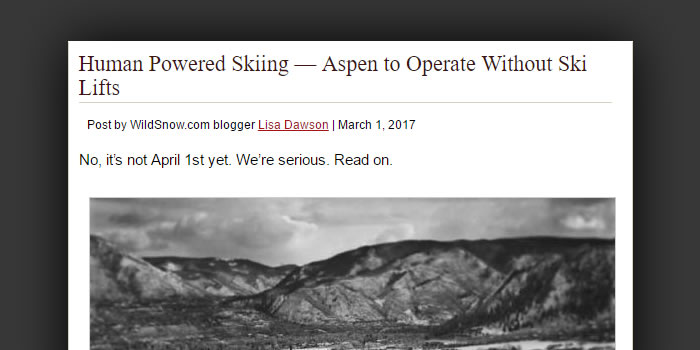 Uphill access is a really interesting development to me.

While on the one hand luxury resorts are building high speed quads to satisfy demand, there’s enough interest in uphill access that some resorts can sell uphill-only passes and lost areas like Mount Ascutney are budding with nothing more than a rope tow leading to, you guessed it, more uphill access.

What’s interesting about a recent bit of news, however, is how one resort – Aspen Snowmass – is spanning both of these groups.

According to Wildsnow there have been and will be a few things this season that encourage uhill access like events and Thursday refreshments at Cliff House Restaurant, but things get really intriguing toward the end of their list:

“Buttermilk/Tiehack ski area is the first in the Aspen area to close every winter. This year the Aspen Snowmass Ski Company will extend Buttermilk’s season by opening the mountain to skiers, without operating lifts! That’s right: the restaurants will be open, the runs will be groomed, but none of the lifts will be operating. It’s skin up and ski. With the exception of diesel the snowcats burn, this could be the greenest local resort skiing in recent times. “

Even more, Aspen Times is reporting that they’ll do a little extra to draw interest from the uphillers in the area.

“Four Mountain Sports will be open with rental options, gear and end-of-season specials. The base of Buttermilk Mountain will turn into a “Festival Village” with vendors, demo booths, guides and clinics for the public. Beginners can demo equipment on Panda Peak.”

Every spring there is a paradox that stirs some angst in even longtime locals.

It’s that fraction, however, that raise their voices in frustration when they look up and see lifts standing idle of snowfields when just months before those lifts were spinning above trails littered with rocks and bushes.

What I love about this concept is that it extracts additional value from that snow – in the form of both goodwill among the uphill community and actual skiers making turns across it – without the overhead of a typical ski day or other issues that prevent resorts from extending their seasons.

So I stand with these guys…

…and echo their kudos to Aspen for seeing the intersection between the uphill community and all that white gold that otherwise sits trackless until it melts in May.

Savvy move and I’m excited to see how it goes.