What I'd Do
Steve Made a Matrix That (May Have) Saved Apple, Should Resorts Do the Same?

I sometimes feel I do too much critiquing and too little suggesting. Like, somehow, I’m the 400 pound, mullet-sporting guy on his 3rd beer at the baseball game yelling at the 2nd baseman to hustle. So, every once in a while on a Wednesday I’ll try to balance the scales a bit and put my own ideas up for display, analysis, and critique. (view all “WID” posts).

I’ve got a challenge for you: quickly make a mental list of as many named season pass or lift ticket products you can think of. The first five that come to my mind are EpicPass, Mountain Collective, Brighton Quad Wednesdays, Snow Day Pass, and the New England Pass. With little effort, you can probably rattle off a couple dozen…if not more.

Pass products are awesome at gaining brand awareness. They have specific names and skiers know them. It’s easy to recall prices, benefits, and compare options: no chart necessary.

Now, a new challenge. Make a list of all the named/branded vacation packages you can think of. If you’re anything like me, coming up with more than one or two is tough. Heck, I couldn’t think of a single one for a while until I realized that the Sugarloaf’s Zoom Rooms and Copper Mountain’s Powder to the Pillow lodging options might fit. 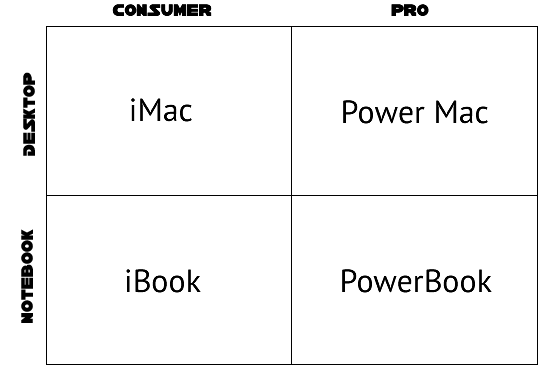 If I were to draw something similiar for the ski industry, I might start with Local / Destination on the left side and Passes / Lodging on the top. And I just realized that I accidentally reversed the Mountain Collective and Grand Pass in the image…so do a mental swapperooski with the grid below :) Grand is for local, Mountain Collective is for destination. 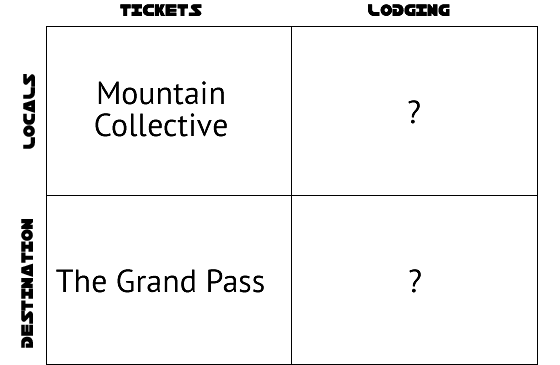 No matter how hard I try, I can’t think of a single vacation product that would fit into either of the two boxes. They do, of course, exist, but I can’t recall them on demand.

An Opportunity?
The more I think about think about the right column of that matrix, the more I wonder if there is an opportunity for two clear, branded vacation options: one for locals and one for destination guests. Just like pass options are given clear names with clear benefits and then promoted almost year round, I’d do the same for vacations.

For example, what if there were a companion product to EpicPasses called EpicTrips? For $599 a person (that’s a completely random number, btw), an EpicPass holder would get 4 nights of lodging and an included evening activity (like dinner, ski biking, etc.) at any out-of-state resort. Or, for $299, an EpicWeekend would be two nights of lodging (and the same perks) at any in-state EpicPass resort?

Or what if a Winter Park had Weekend Winter Sparks (yes, I am aware of how lame that name is)? For $399 a couple could get two nights lodging, two romantic dinners, and two lift tickets any weekend they’d like?

The Alternative
If I live in Boston and want to spend a weekend in the mountains, what will come quicker to mind: a $999 Family SuperTrip or a possible combination of dozens rooms and dozens of tickets at one of a dozen resorts? See what I’m getting at here? Without a vacation brand, there is no scaffolding to help guide my mind toward one ski vacation option over another.

This idea is still in its infancy in my brain, but I can’t help but think that one, clear, branded vacation option for locals and another for destination guests, each designed to get them to say a little longer (or spend a little more) than their demographic normally would might just help your resort’s vacation packages set themselves apart from other mountains’ this winter and fill a few extra rooms along the way.