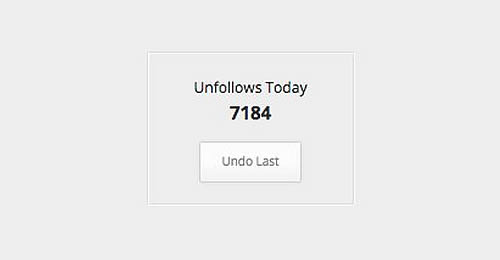 A few weeks ago Dave Amirault gave the best heads up a nerdy, number-crunching marketer could ask for.

He tweeted me this:

@slopefillers If you see a large disturbance in the force, it’s just us unfollowing everyone ;-) pic.twitter.com/qiZnUoL5MP

I was stoked. But before I go on, some backstory.

Catch 22
One of the things I’ve always loved to test is the idea of the value of following someone on Twitter. Because, among other upsides, a follow holds two bits of power over the person you follow:

Abuse the first in the quest for the second, and the dopamine goes away (being 1 in 1,000,000 isn’t always a good thing). Likewise, focus too much on the first and you can’t scale the second (following 100 can only lead to so many reciprocal followers).

It’s an interesting conundrum. But one that’s changed drastically over the years.

Then vs Now
Back in the day, following was the craze because following was reciprocated. As many as 30-35% of the people you followed would return the favor. Likewise, if you unfollowed everyone in your account about an equal number (20-25%) would stop following you back.

All of these numbers had come from my own tests over the years. But the one thing I had never done is, in modern-day Twitter, unfollowed a large number of people. Even more, I had never done it from the account of an established brand. So, in this era when following/unfollowing volume has slowed to a trickle, what would happen?

Snowbird Daily Follower Growth
Let’s make this a game, shall we?

I’ve hidden the dates below. I want you to guess which bar on this chart represents the day when Snowbird unfollowed those 7,184 people.

Okay, I’ve made that day orange on this chart.

Was there a mass exodus? No. There was no difference at all. On the contrary, when you compare that day to the days preceeding it was actually a little above average.

The spike after it was probably more a result of Snowbird magic than unfollowing 7,000 people, but it simply supports the case that unfollowing people – even many people – makes very little impact on who does/doesn’t follow you.

Upsides
There are many upsides to this, but among my favorites are the fact that each follow Snowbird now makes carries a little more weight simply because it’s a little more rare. It’s a little dopamine-dripper they can keep in the back pocket when necessary.

But it also makes Snowbird’s following:follower ratio look much, much better. And by better I mean much less spammy or “following just so people follow me back” which, and I’m speaking from experience, is not a road you want to go down. And much better aligns with a brand like Snowbird

It’s an interesting test and result, but it is isolated.

So, if any of you get inspired by Dave’s actions and decide to do it yourself, please, with all the nerdiness I can infuse into a plea, let me know.