There is a ton of innovation going on with beginner products which is completely awesome.

I’m going to talk about one today that I’ve noticed mainly because, well, it’s happening down the street from me at Snowbasin.

It’s called Learn & Earn, and what’s awesome about it is two fold:

Let’s take those one at a time.

A Great Package
The idea of “all inclusive” is, to use a rhyme, elusive.

But this package gets a few free meals sky of that concept for beginners. Take a look. 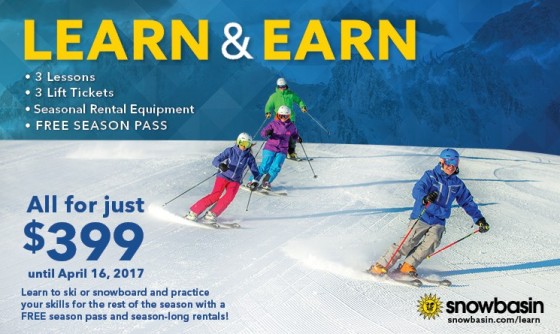 Marketing usage of “FREE” aside, it’s a package that includes:

That asterisk represents the fine print that you have to complete all three lessons to snag that season pass (hence the “earn” part).

The price is $399. The value within that price may not be readily apparent to the average beginner (though I’d be tempted to show some math to clarify), but we all know that’s a pretty good deal.

Buy Now
What’s awesome about it though, and what has me most excited, is that as a package, as something that’s not date-specific, as a product that has everything you need to have as successful a first season on snow as possible, they can start selling it now.

And they are. What this and the EpicPass and 4-packs do is create opportunities to lock in revenue and loyalty from now just loyal locals, but the full spectrum of demographics during the entire off season. Which is awesome.

The traditional season pass has long since proven itself, Vail really brought to prominance the idea of a destination season pass, and now we have something else: the never-evers season pass.

It carries the same attributes – earn season revenue, better deal than buying as you go, etc. – but is something that can be marketed, somewhat paradoxically, to people who have never skied a single day in their life.

Close Eye
This is one I’m going to keep a close eye on.

If we’re honest, a program like this will probably take 5+ years to dial in terms of language and distribution and visuals, so I hope that Snowbasin sticks with it for a while and gives it a chance to pivot a few times to fit that right fit in the market.