Last season, for many resorts, was the best in years. Some mountains even pushed their closing dates back into late April, May or even June on the heels of record snow. The tricky part came when resorts tried to recoup the cost of staying open longer than their season pass pricing was designed for.

Crystal Mountain found themselves in one such predicament. There is a fascinating discussion on Kim Kircher’s blog about the situation, but the gist was this – 2010/2011 season passes would not be honored but 2011/2012 passes would. The response was swift and harsh with the central question being, “if I bought a 2010/2011 season pass, is 2011 Spring skiing not part of that season?”

As the discussion rolled on, some passholders wondered if they would get a refund in future seasons if the resort were forced to close early due to lack of snow. While Crystal was okay this year, many resorts were faced with closing early less than 12 months later.

Seven Springs’ Pleasant Surprise
Early on April 23, Seven Springs, Pennsylvania started reporting snowfall at the mountain. First 3″, then 4″, then 5″ until this string of tweets was sent: 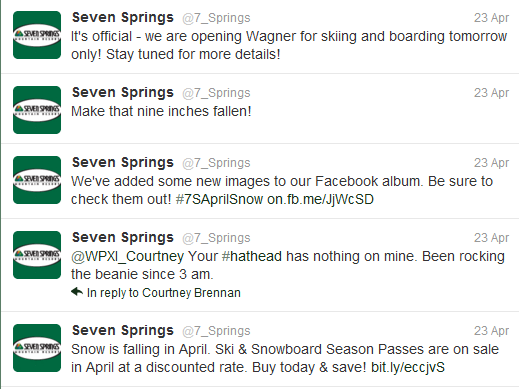 In the end, 18″ of snow fell and the resort decided to reopen. With that decision made, there were now other things to consider:

What Seven Springs decided probably didn’t look great on the balance sheet that day but I think will pay serious dividends down the road.

Stoke^2
The resort charged $24 for lift tickets, honored season passes, honored 2012/2013 season passes and even had free hot dogs for all to enjoy. Here’s their full video report:

News spread pretty quickly. Besides two, live Weather Channel interviews during the day, they even landed on the front page of The Washington Post.

More than anything, though, the skiers at Seven Springs were stoked. The mountain had a chance to show their brand’s true colors which, in this case, were about skiing and having an awesome time on the mountain, not using late season snow to milk a few more pennies out of the year.

For the next few seasons, as Seven Springs skiers consider buying their pass, they’re going to remember April 24, 2012 and feel just a little bit better about opening their wallet.