Perspectives
A massive thank you to the post-#fail marketing crowd. 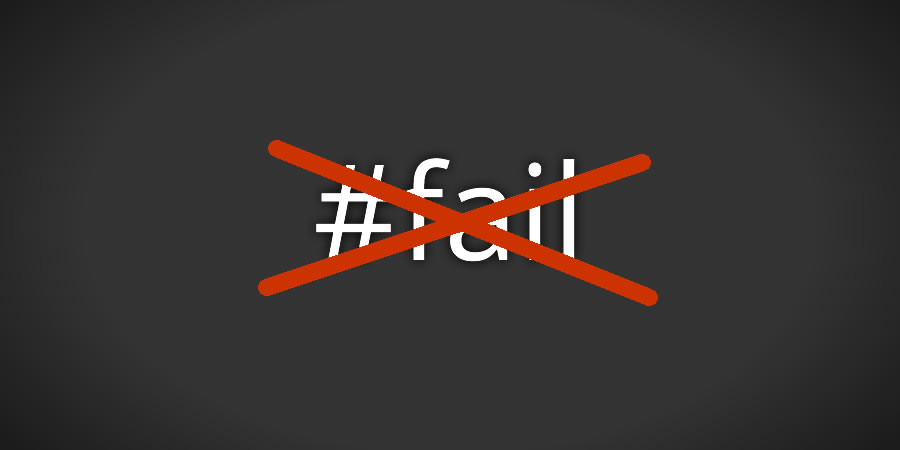 I’ve talked about this before, but feel like it’s time to bring it up again.

Of all the hashtags social media users have embraced over the years, in marketing circles the classic #fail quickly took root and has refused to budge. We rant, we rave, we complain, we call out someone for virtually no reason.

In the few seconds since I began writing this piece, dozens of new posts crying #fail have been shared across the web.

That Was Me
Once upon a time, I was one of those people. In the early days of SlopeFillers, I wasn’t shy about calling people out, boldly declaring that the marketing they were doing was missing something that I in my infinite wisdom could see with the utmost clarity.

For the first time in a long time I was about to click on a Facebook ad, that is until it refreshed the sidebar with new ads. #fail

I didn’t do it often, but I did it enough that people noticed. In my first conversation with Corey Ryan upon agreeing to join Ryan Solutions, he mentioned one such case with Jackson Hole I had published earlier that year.

One that, just days before, I had realized I had gotten 100% wrong.

Changin’
But slowly I began to realize two simple things.

Yeah, it got me some clicks and some likes and an echo-chamber of people joining in, but that’s not how I wanted to measure success.

But Most of All
Most off all, however, that wasn’t me.

Take basketball for example. When my opponent looks winded, I’m not belittling him, I’m giving him props for hustling down the floor while I cherry-picked on that last possession. In my high jumping days when I was lucky enough to win a meet, I was always the first to give the runner up a high five or handshake.

So why, in the marketing world, was I kicking people when they were down?

The Change
One day, and it really did happen that quickly, I decided to change. I decided never to use the #fail hashtag again. That tweet above? That was actually the last time I used it to call something/someone out on Twitter, more than seven and a half years ago.

Along the way, I went from no longer using #fail to advocating for the opposite.

Too many cries of #fail and too few of #awesome. If a brand does something clever, tell them. We could all use a high five these days.

Very cool of @MontTremblant to include a Fall Colour scale on their homepage with recent photo. pic.twitter.com/asHTz9nzx8

Or, maybe the best example of all, Loveland and A-Basin in their quest to be the first to open:

Congratulations to our neighbor @LovelandSkiArea! Thanks for making the #RaceToOpen so much fun. Let ski season begin! https://t.co/Na0tiZEcpZ

It’s not easy to bite your tongue when you see something that’s a bit of a head-scratcher, but heaven knows we’ve got enough things to worry about these days, belittling someone’s best efforts at marketing shouldn’t be one of them.

So, thanks. Thanks for giving high-fives instead of backhanded remarks. And thanks for joining me in the post-#fail era of marketing conversation.