Perspectives
My two-cents on all the recent acquisitions. 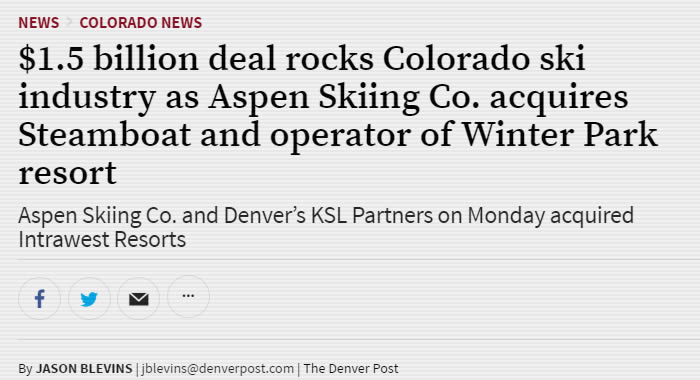 I wanted to give myself some time to chew on this news a bit before I wrote anything in response to the Intrawest and Mammoth acquisitions by Aspen/KSL.

There’s no sense rushing to conclusions about a scene that won’t start playing out for another year and could continue for decades beyond that.

It’s Good for the Resorts
First, I think Aspen/KSL’s purchase of Intrawest and Mammoth, et al is very, very positive.

Intrawest held the keys to a significant portion of skier visits in this country. Intrawest was also looking for a buyer. Who better to take the reigns than a company like Aspen that is run by some of the most talented, savvy operators in the industry.

It’s Good for Skiers
Competition is typically good for consumers, and I see no reason to expect anything but positive for skiers as the Epic Pass and Vail Resorts get some much needed competition.

It’s Good for Both Companies
So being, both companies will be driven to innovate around their pass products to try to gain the upper hand in the market.

I wouldn’t be surprised if Vail returns a significant amount of focus to EpicMix in the coming months to serve as a differentiator versus Aspen/KSL.

It’s Okay for Mid-Sized and Independent Areas
Will it increase competition for non-consolidated resorts and ski areas? Yes. And given the fact that virtually all of these resorts are luxury resorts, it will make it harder for mid-sized especially to compete when their passes are priced just below a pass good at 15 luxury brands.

That said, I think some are better positioned than others.

Small Impact on Small Areas
I think small ski areas will see little to no change. They’ve got a good narrative against “the man” if they want it, but I don’t think luxury competition/consolidation is a huge threat to their status quo.

More Coming
You’d have to imagine more is coming. And I don’t think it will take a long time to happen. Not because either company is ready, but because they don’t want their competition to get it instead of them.

It’s Good for Industry If…
Long term, I think the rise of the destination pass concept will be good for skiing. It will open the eyes of traveling skiers to the benefits of passes we’ve always appreciated as locals (flexibility, cost savings, less pressure to ski 7 hours a day, etc.).

But I think that will only benefit the entire industry if those perks create more interest in skiing or preserve interest among individuals where it would have waned (grows the pie). If all it ends up doing is shifting ski vacations away from independent and mid-sized resorts, that could be a problem.

Grab the Popcorn
However this plays out, it’s gonna be fun to watch.

Not just for the bigger moves in terms of acquisitions, but we now have the savviest marketers in skiing in the same weight class. I don’t see any “us vs them” coming from either team, but watching these marketers dance around one another’s products and messaging…

And so begins the season pass war of 2017. pic.twitter.com/1z5V0woyiN

…is going to be interesting to say the least.