Perspectives
The feeling of skiing beginner runs in blue jeans. 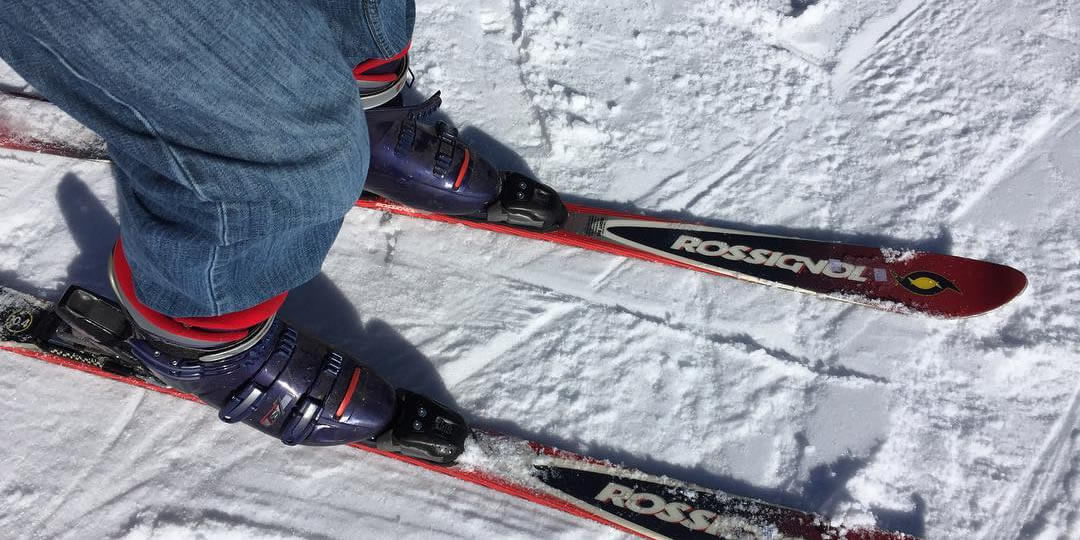 Just over a year ago I donned some blue jeans and had one of the most insightful skiing experience of my life. Not able to shake these lessons and not having a better way to say them, I’m bringing it back to the surface for a simple, spring reminder of what it’s like to be a beginner.

I started the day with a simple goal: get as close as I could to being a beginner so I could, hopefully, see through their eyes.

But as the idea shaped up, I realized that I didn’t just want be a beginner in theory, I wanted to be a real beginner. A beginner who doesn’t know a thing about gear or clothes. A beginner who takes the wrong trail and ends up in a situation that’s way over their head. A beginner who goes straight to the top and figures out how to get down.

That jeans-clad skier, however, is me. I hadn’t spend more than a few beginner runs on skis during my life (I snowboard), so playing the part was fairly easy.

I wore 15 year-old boots my brother used to ski in and a pair of way-too-short skis we picked up at a thrift store years ago. I left my waterproof gear at home, donned a pair of jeans and a zip-up hoodie, and went straight to the top of a non-beginner lift to make my first turns on skis in years.

I expected to experience something unfamiliar. I expected to at least learn some random lesson from this exercise. But I was completely taken aback not just by what happened, but what I felt.

#1) I Was Really Self Conscious
Let’s start with perhaps my biggest surprise. I’m not one to worry about my appearance much {understatement}, so I was totally caught off guard to find myself nervous about getting out of my car. Why? Because I’d be the only one in a busy parking lot wearing the wrong thing. Even more, I knew exactly what all those skiers would be thinking when I did.

I think a similar scenario would be showing up to summer ski conference (thing NSAA National) in a tux. It may have seemed like a good idea based on your world view (you do, after all, wear jeans doing outdoor things and some ritzy conferences do have absurd dress codes), but you’d instantly realize you’re the only one dressed like that and feel completely self conscious until you could change.

And remember, I was dressing this way intentionally and that fear of being judged still hit me. Catching a liftie saying “dude, check out that guy in the jeans” after I loaded a chair didn’t help. That desire to not stand out (when you aren’t trying to) is a powerful thing.

#2) I Always Felt in the Way
I was expecting this, but once I was actually in that situation the emotions were 10x stronger than I could have imagined. I caught myself looking over my shoulder probably 25-30 times before I’d gone even 400 yards. And all those people flying by me on either side (like I would do without a second thought on my snowboard)? They absolutely terrified me.

The more kids that sailed by, the more I tensed up and shortened my turns. The only comparable emotion I can think of is riding my bike on a busy street with no shoulder: extremely tense, mentally crossing my fingers I make it through unscathed, and hoping to get somewhere safer soon.

#3) Taking a Wrong Turn is a HUGE Deal
I wish I could wire the emotions from this part of my day directly into every marketing director’s brain, because it’s an emotion I have absolutely no words for. I should have worn a heart rate monitor just to see the spike at this point of my day.

It reminded me of driving an icy mountain road with no guardrail. Every muscle was taut, my speed was slow, and if my ski hung up even slightly as I tried to initiate a turn I could sense my eyes widen and hands tighten their grip. In hindsight I can laugh at how scary that situation seemed, but the fear was absolutely, 100% real.

#4) The Ability to Stop is Everything
I’d heard the Snow Operating guys talk about this with their Terrain Based Learning stuff, but I can say first hand it’s the honest truth. The fear on the steep runs was NOT falling, it was ending up going too fast with no way to stop.

The scenario that played out in my head when a my ski got hung up on a turn was being pointed straight downhill, off balance, only going faster and already past where the point where I feel I can stop.

#5) Short Skis are Amazing
The last skis I used were probably 195cm long. I can actually see them out in the garage now and are at least a few inches over my 6’2″ head so maybe even closer to 200cm than that. The difference was instantly noticeable and the ability to make those short, tight turns was everything on both busy trails (to feel less in others’ way) and steep trails (to keep my speed under control).

And for people who hadn’t spent 20 years on a snowboard.

Because here’s the thing, I ended up having a really, really great time.

But that pleasure came almost exactly proportional to gaining confidence in each of those areas. When I embraced the way I looked, I started having more fun. When got a better feel of my edges and could stop faster, I became more relaxed. When I found a trail that was less crowded, I stopped looking over my shoulder. When I knew I was confident I wasn’t headed toward a steep run, I could actually enjoy the skiing now instead of worrying what was ahead.

I guess what I’m trying to say is two fold.

First, confidence is everything on your first day. And we have control over a lot of that with our marketing communications, signage, and staff. If we can help people feel confident in the small aspects of skiing – like how they dress, where to go, etc. – the only thing they’ll have to worry about it making their turns.

Second, the difference between imagining how beginners must feel and actually feeling those emotions was massive. In fact, there is no comparison. There is NO WAY to truly understand what’s going on in their heads until your feet are in their boots.

So let me wrap up this post by challenging you to do the same.

If you ski, grab a board. If you board, grab some skis. If you do both, I dunno, go country swing dancing. Put on a pair of jeans and a starter jacket and expose yourself to the feeling of being totally out of place. Realize that you already know where to go, you know how to buy a ticket, you know where to park, you know how to load a lift, and try to imagine those parts as you semi-truly experience the rest.