Perspectives
Five lessons from a winter of small skiing.

Between my own efforts to drive home this point and ideas I’ve written here, this is a point I’ve never been shy about.

But for all the awesome days I’d spent at small ski areas, I’d never spent an entire season. Theirs had never been the logo on my season pass.

So, last year, I changed that.

The Choice of Area
I bought my pass to Nordic Valley. While this mountain’s would be thought of differently in different places, it’s the smallest area in Utah (110 acres) by a fairly large margin (next closest is 200 acres, next after that is 450) despite having nearly 1,000 vertical feet of skiing.

All of their terrain is served by one double chair (two other beginner lifts service a small portion of that terrain). 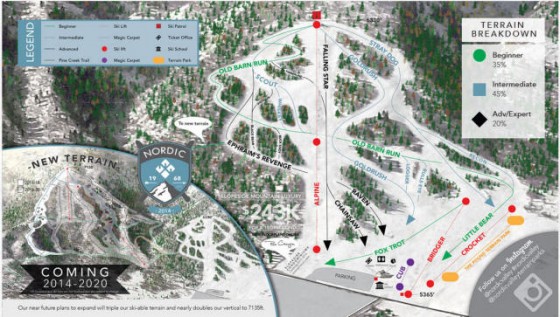 Two years before I’d had an Epic Pass. As a comparison, there are more resorts on the Epic Pass than there are runs at Nordic. The year before my selection had been Snowbasin with top-to-bottom high speed lifts spanning 3,000 acres

Again, the difference was stark.

But I put my money where my mouth was, bought a pass to Nordic and…was totally blown away.

#1) Holy…Fun
It’s hard to explain why I had so much fun this season because my skiing went against every part of the stereotypical epic season. I skied in rain, I skied in powder, I skied on ice, I skied on slush. My first day, in fact, was on nothing but a beginner hill that had been rained on for 24 hours straight before 3″ of gloppy slush fell on top.

Yet I came home grinning from ear to ear every single time. It became a joke at our house. I’d tell my wife, “no, that was my favorite night of the year” on Tuesday only to repeat those words a few days later.

In other words, I learned first hand that the size of the mountain has virtually nothing to do with how much fun you can and will have skiing there.

#2) Creativity
There are kids who always need new toys to be happy. Adults too I suppose. Then there are others who, given a cardboard box and a toilet paper tube, can entertain themselves for hours.

After a few days at Nordic had passed I realized that I had started the season like one of these kids. If I wanted excitement, I needed new. I needed bigger. I needed better. But slowly, steadily, I was becoming less of what I started to call “a high maintenance skier” and more like a kid with a pile of cardboard.

Because I realized that the alternative to bigger and better is simply creativity.

“I’ve already skied that line a few times, what else can I do with it?”

My last run of the year is the perfect example of that. It started with an ollie over a bare patch, hard turn left to a couple straight airs off successive cat tracks and then a really hard right to traverse one last patch of snow to then ollie from one bush, over the next, and onto a transition above another cat track where I then veered right off a cat track down a barely skiable 8′ wide swath to the bottom.

My Dec 2016 self would have skied that run, said “meh”, and looked for something else on the next. My Mar 2017 self saw things with new eyes.

#3) Fun Feeling Good
One thing that really surprised me was how fun it felt to be one of the best skiers/snowboarders on the mountain.

I am in no way an amazing rider, but when all the semi-pros are at Pow Mow or Snowbasin, I was about as good as there was at Nordic. I’d get hollers for doing a grab off a small jump or simply skiing a tighter portion of a line below the lift.

Feeling skilled or important or talented is an insatiable human desire. When there skill level drops around you, it’s easier to feel that. Sounds silly, but it’s absolutely real.

#4) Confidence in My Choice of Run
I spent many days at Snowbasin last year but I never felt confident that I was going to the right place when I snagged that first chair or few on a powder day.

It was like ordering off a menu with 200 things: it’s easy to regret your decision with so many alternatives and it would 1,000 nights of dining out before you try them all enough times to feel confident in your selection.

Within a few days I knew exactly where I wanted and needed to go when the snow was good. Variety is great, but confidence in your choice was a surprisingly powerful/empowering feeling.

#5) They Need Legitimacy
What surprised me was how people would respond when, during a conversation about skiing, I’d answer the question of where I skied with “Nordic Valley.”

Knowing I’m really into the sport, knowing I have a foot in the industry, people were always taken aback and responded with a vibe that’s probably best described as, “why would a skier like you ski at place like that? Wouldn’t a REAL skier ski at Pow Mow?”

What these areas need more than a lot of things, is to be somewhere that good skiers choose to go. Somewhere they want to go. Somewhere, when asked about their skiing weekend, core skiers excitedly talk about their time at Nordic or Song Mountain or Cooper or one of a couple hundred similar mountains across the country.

But perhaps the most telling thing I can say is simply this.

Snowbasin is building a new lift, PowMow’s expansion continues but next year? I’m going back to Nordic.