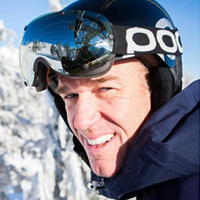 Winter resorts. That’s what you are. Protect Our Winters is trying to keep the first word in that description from disappearing. A worthwhile goal, don’t you think?

I’ve been following the climate change debate for a while. So when I had the chance to shake hands with POW’s Executive Director, Chris Steinkamp, recently, I jumped at the chance to get this ex-marketing-exec’s view on resorts, climate change, and what that means for resorts and resort marketers.

Gregg: First, this is a big topic with lots of perspectives. Let’s make sure we are all on the same page. In a sentence or two, what’s POW’s stance on climate change: man caused, man assisted (how much), natural cycle, etc.?
Chris: It’s proven that climate change is real and its being accelerated by man made greenhouse gasses. The science is unequivocal about that and to us, we can’t spend any more time debating it. Its time to move towards solutions, because our window to save any semblance of winter is closing fast.

Gregg: A few resorts have done some small things to raise awareness or purchased credits/offsets and others have gone big by installing wind turbines or methane generators – is this a matter of getting buzz, PR, and building a brand or do resorts have an obligation to be active in working with and supporting a causes like POW?
Chris: We think that resorts should dial up their sustainability efforts because it’s the right thing to do. And they’re cost saving measures too. But do it for those reasons and know that, that alone isn’t solving climate change.

We think that the most effective things that any resort can is:

Climate change is going to directly impact every US resort, so its time to see this as a real threat and work with us to do something meaningful about it.

Gregg: Let me hit something from your response to Q1 again and dig more into the branding side. In fact, let me break this up into two questions. First, I’ve been in global warming discussions that border or religious or political debates with emotions high on both sides. If a resort takes a firm stance on global warming, can they do so without driving away the group of the US population that hasn’t looked at the science, hasn’t studied the data, and because of players, personalities, or perspectives thinks that global warming isn’t real or man-caused?
Chris: Climate change has become so politicized that’s its clouding rational decision-making. A resort has to take a stand on an issue because its an issue that’s threatening their business, and that needs to be explained to anyone who questions their motives. Its the responsible thing to do, and in the best interest of their consumers. The converse needs to apply too in the fact that climate activism is appreciated by a growing majority of winter sports enthusiasts so taking a stand on climate change will actually attract consumers. After Jiminy Peak installed their wind turbine, the next year skier visits were up 15%, some of which might be attributable to their sustainability efforts.

Gregg: And, second, how does a resort take a strong stance with their brand while, at the same time, not ignoring the fact that their business relies of thousands of people driving a combined tens of thousands of miles each weekend to their mountain? Should a marketer be worried that their environmentally focused brand may be sending a silent message of “come skiing, but we think driving 3 hours here to do so is irresponsible”?
Chris: We always say that nobody’s perfect and that we all need to use our biggest levers while staying in business. We all recognize the fact that resorts need to stay in business which means that doing some carbon-intensive things that they aren’t proud of. But with that, comes the responsibility of finding their biggest levers and exercising those. So, ok, people have to drive or fly to the resort. Then, can they partner with a shuttle company to take some cars off the road? Better yet, can they take more high-profile stand against climate change to affect federal policy? Use your lever to make the bigger difference and let consumers know it.

Gregg: Jiminy’s wind turbine has very much become part of the image and brand of the resort. I think the climate change message that sends is pretty clear. When Steamboat opened their Sunshine Express headlines stating it was “solar powered” because of they credits and investment they made that would produce the equivalent used by the lift. It’s been a few years, but I remember a bunch of feedback that equated to eyerolls at equating credits to being “solar powered”. Is that route, vs the Jiminy Peak route, ever viewed as a negative to a brand as some sort of a cop out to installing the real deal at the mountain?
Chris: REC’s and carbon offsets are quickly becoming widely known as a shortcut to be able to claim carbon neutrality. Consumers know that buying offsets doesn’t equate to being fully carbon neutral so eyes do roll now when people talk about them They’re fine as supplementary sustainability strategies, but they just can’t exist as the only solution.

Gregg: Any quick ideas or advice for resort marketers if/when their resort starts sending this message?
Chris: I’m a 12 year advertising exec and marketing advice is not to dwell on communicating the negative effects of climate change and its doomsday effects on our business. We’re trying to get people involved. Instead, we need to engage the consumers in what the resort is doing and activate them to become fans or part of the overall effort. That’s critical. If a resort can message their effort so well that consumers say to themselves, “thats cool. I want to be part of that”, that’s a home run.