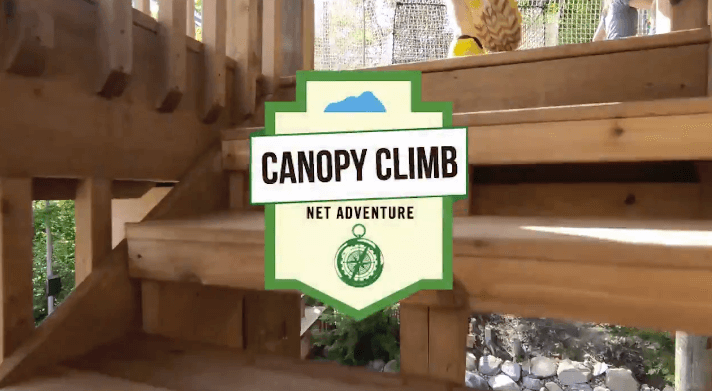 The other day we were at Snowbasin eatin’ burgers and ridin’ gondolas.

Of all the activities that caught their attention that day, I was really surprised to find that a miniature adventure course wasn’t one of them. I pointed at it from the gondola, told them what it was, and got nothing but a “meh” in return.

I think somewhere between not being old/big enough to understand you’d be harnessed in and the lack of recognizable features (a park without monkey bars is no park at all if you ask my daughter) meant this activity just didn’t click for them.

Blue Mountain’s Take
Which got me thinking: if an adventure course is too intimidating for a certain age group and a playground isn’t enough to tout as a true pay-to-play activity, what would the intersection of those things look like?

As I’ve thought about this, a classic list of three things came up that I really, really liked.

#1) Stuff They Love, Just Bigger
Trampolines, slides, and wall-to-wall nets? They get that stuff. That’s stuff they’re used to. I think that “stuff I already love but bigger” would help this click for kids.

#2) Lots of Freedom (Non-Linear)
When kids play, they don’t follow any linear set of rules or procedures. They just…well…go. “Do this, then that” is for school and home, so I like that this would feel like play to kids.

#3) Totally Safe
Kids get scared sometimes, and parents (myself included) often shy away from things that they know might cause a scene, especially if they have to pay for them. Tying this back to the freedom point, even if a kid only does the trampoline area because they’re terrified of the slides, they’ll still have a great time.

Awesome, Sooooooo Awesome
I’ve been preaching the power of playgrounds for a long time, and this is such an awesome example of taking the reason kids love playgrounds and making it a true activity.

It’s hard to charge for playgrounds, but something like this? Absolutely.

Very well played concept that is sure to catch the eye of a lot of families, including mine. Nice work, Blue Mountain.