Branding
I am completely in love with Sugarloaf’s mosaic campaign.

There’s a phrase that I probably didn’t coin but somewhere along the way claimed. Though it’s taken a few variations, the most common is:

Put their name up in lights.

I’ve used to describe everything from my content strategy to the purpose of awards to why we all strive for accomplishment. Whatever the context, humans like having their name up in lights.

Just the Start
The campaign I want to share today starts with that idea, but it is only the beginning. Because to it they’ve added a few other ideas:

Any one of these things is a really powerful concept to build a campaign on.

Sugarloaf, however, is building a campaign on all of them and it’s absolutely, completely brilliant.

A Mosaic
Here’s how it works in their own words:

“Use the ‘Upload’ button [to] add up to 5 pictures (less than 10MB each) to the Mosaic. Each picture you submit represents one entry in the season pass sweepstakes….Once your photos are approved (about 48 hours), you’ll get another email with a link so you can easily find your shots. After the mosaic is complete it will be printed and permanently installed here at the mountain.”

That mosaic won’t just live on the mountain, it’s coming together in real-time as photos are uploaded to the site. Here’s what it looked like the day I wrote this. 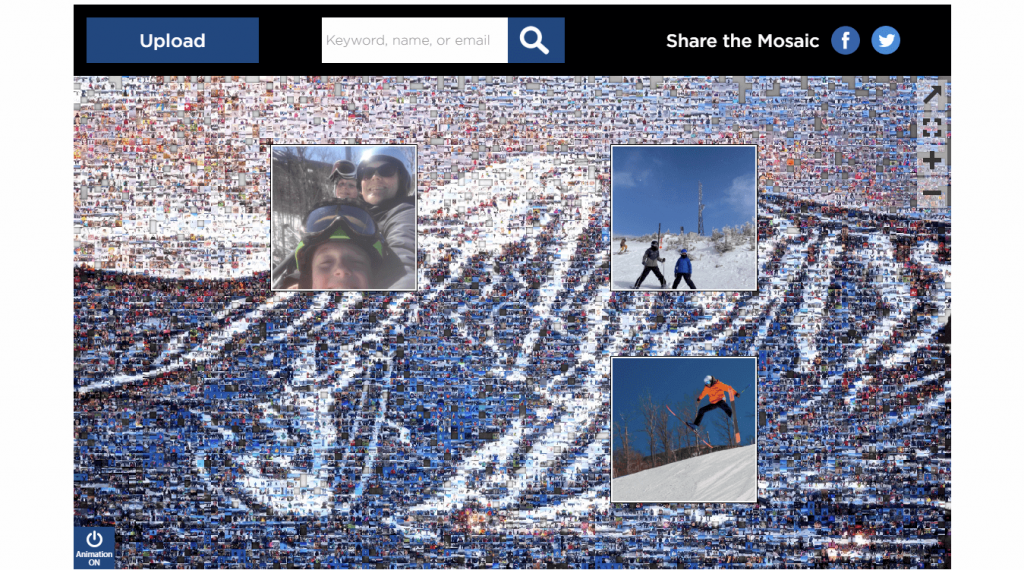 I seriously love this on so many levels.

First, it’s simple. The technology isn’t something they’ve built in house, it’s just a really smart, clever application of something technically any resort has access to.

Second, it’s perfectly on brand. The term sugarloafer is just one aspect of a strong community and culture that the mountain is famous for. Doing something around this community is a perfect compliment.

Third, it’s well-timed. Everyone who uploads a photo gets entered into a season pass. So besides the benefits above, it also adds a little energy to this season’s pass sales wave.

I could go on and on, but I’ll stop there with one last hat-tip to Ethan and the gang for such a smart, simple, powerful combination of marketing principles.