Print Ads
Real Data from a QR Campaign: How to Triple the Response Rate

Is it just me or is there a shockingly low amount of actual data about QR codes being used in the wild? Surveys are finally starting about how students or smartphone users perceive QRs, but what about when they actually come in contact with one. Will they scan it? Will they ignore it? Will they know what the heck it is?

Moreover, I almost never hear people talk about QR alternatives like a plain old URL. I wanted to find out how QR codes with fare in real life. So I did.

Research Setup
My time was limited along with my resources so I kept it extremely simple. The basic research question was “When given a flyer with an intriguing headline, would college students choose to use the QR code or a Bit.ly short URL to get more information?” The QR or link sent them to a landing page which included a quick survey asking them why they used the method they did. Thanks to some stellar student-friends of mine, in a couple short windows of good weather we got out close to 1000 flyers.

Note: Let me also say that I really wanted to give the QR code every chance to win so we gave flyers to students outside as they walked between classes, at bus stops, etc. when their only real option was to use their phone. The research might have told another story if they got these flyers as they arrived home or at work where a computer would be easily accessible. I also made the QR code pretty darn big, a little over 1″ x 1″ on a 5.5″ x 4.25″ flyer so it was impossible to miss it and even a camera phone with awful resolution could scan it. 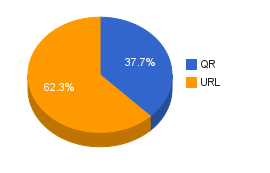 Honestly, I was surprised by how many kids used the QR code compared to the URL, but Bit.ly still ran away with it: 62.3% typed in the URL for more information, 37.7% scanned the QR code.

Results: Why did you scan the QR? 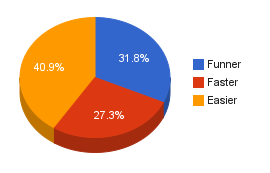 Results: Why did you type in the URL? 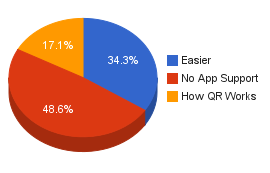 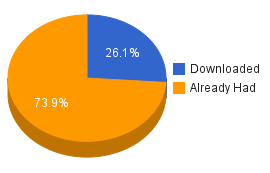 The flyer also included a link to download a 2D barcode reader app which 26.1% of the QR scanners did in order to scan the code while 73.9% already had a reader on their phone.

Limitations
QR codes are new, intriguing little buggers. For that reason, the QR code might have enticed some normally indifferent folks to take interest and type in the URL even though wouldn’t have normally done so. In the future, it would be nice to test the two independently. Another factor is that these were flyers, not posters. Since they could take the flyer to a computer and type in the URL, response rate is higher than what I’d expect from a poster version. Also, students are one, phone savvy demographic but I’d love to test this across the board.

If you are set on using QR codes, here are a few takeaways to consider as you design your campaign..

Takeaway #1 – Include a URL, Triple the Response Rate
In any marketing campaign, knowing that one small tweak could triple the response rate would be a no-brainer. It appears that’s what a Bit.ly URL does when listed with a QR code. Giving the non-smartphone users a viable alternative appears to be a critical element.

Takeaway #3 – Don’t Just Use QR for the Sake of Using QR
An interesting part of this study was a small segment of the research that did take place on a cold day. Only a handful of responses came in, but QR was beaten badly by 4:1. Once inside, it was an easy choice, just use the computer. QR seems to be an clever option when the user has no computer to turn to. Magazine ads? Depends on where they’re read. Posters at local businesses for an event? Probably a better choice. In the lift line or around the mountain? Now we’re talkin’.

Takeaway #4 – Think About Why You Are Using It
If you are using QR to be cool, go for it. However, if you are using QR to get a high response rate, think again. When people are given the choice between QR and a Bit.ly URL (no www, just bit.ly/keyword) and they choose the later 2:1, it’s time to decide if we are dealing with a gimmick or a valuable tool. After these stats came in, I’m learning more toward gimmick.

Takeaway #5 – Don’t Assume You Know Why People Use QR
More than 33% of URL users chose that method because it was easier when that is frequently cited as a benefit of QR. Then theres the 31% segment of QR scanners who admitted they did so simply because it was more fun than typing in a URL. Nothing life-changing, but it’s nice to have some actual data to look at in this regard.

In the end, I was surprised that QR got the share (albeit a small one) that it did, but I’m still not sold on their future.