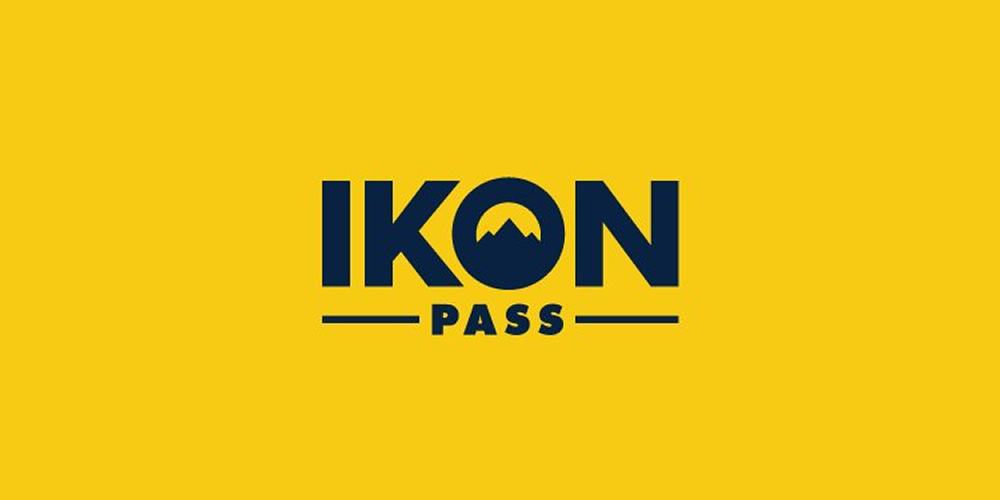 I’ve followed the stories of various passes in various ways. With the Ikon Pass, I’m gonna try something different. Instead of writing a handful of different posts as details come available, I’ll put it all here in one timeline of collateral, details, and reactions.

That Tuesday in March has finally arrived and both passes are now on sale. But before we dig into that, let’s do a quick refresher because it was only 5 weeks ago that I tweeted this:

If you're a business that's built an empire on a single pass and you've known for 7+ months that a competitor was coming and you've got boatloads of cash and savvy leadership, what response do you concoct while your new competitor is busy working on names and logos and paperwork?

Did Vail respond? What kind of a question is that? ;)

Aside from the Telluride news I mentioned in an earlier update, they’ve also come out with three other headline-worthy moves:

We honor the service of our 10th Mountain Division founders, U.S. Armed Forces members, and Canadian and Australian military service members with a $99 Military Epic Pass. For every 2018-19 season pass sold, $1 will be donated to @WWP #10YearsOfEpic. https://t.co/YP7SQBGiii pic.twitter.com/2esX9T7CCO

Perks in Japan, perks at a half-dozen resorts in the Canadian Rockies, and a $99 pass for members of the military. According to multiple sources (I haven’t tried to count myself) that brings the total number of mountains with perks on the Epic Pass to 61.

Price
Which brings us to the final question we needed an answer to today: price. We knew the Ikon pass would come in at $899 for their top-tier option, but what would Epic Pass do? Well, take a look at the screenshots of both checkouts today:

Higher tiers will surely come later in the fall, but right now both are selling for $899 with small variances between types below that.

This is a really, really good thing to see. Parity on price tells me that Ikon and Epic are going to compete on value. No race to the bottom, no forcing smaller mountains to drop pass prices even further. In terms of the overall health of the industry, it’s the healthiest approach we could have hoped for.

We are absolutely going to see a battle for passholders and loyalty the likes of which skiing has never seen, but I’m glad to see early signs that this won’t include the deep discounting of decades gone by. Now let’s just hope we see the same next year and beyond.

Welp, we didn’t have to wait long and we didn’t even have to wait for the pass to go on sale, according to the Ikon Pass site and and article by Jason Blevins of Denver Post fame:

So confusing that my initial version of this was actually incorrect. It’s not 1 group of resorts you share 7 days across, it’s actually 3-4 (depending on you count Aspen Snowmass as 1 or 4). So some are unlimited, some get 7 days EACH, and some are in a group that give 7 days COMBINED. As best as I can tell, here’s that breakdown in table form.

NOTE: CMH only includes discounts to passholders, not free skiing.

First, the price is a touch higher than I expected but give the size of this group it’s certainly justified. The Epic Pass has proven that an $800-$900 pass can sell, so I don’t see any cause for concern there. Considering the chain reaction they could cause by trying to undercut Epic, I’m glad they’re slightly above.

Second, it is a confusing pass. Epic has a simple “unlimited everywhere” concept that’s easy to grasp and see value in. The complexity of three different use types that differ across the two pricing tiers across the resorts (sprinkled with some blackout days at Squaw) and you’ve got something that will certainly be a messaging challenge.

Third, I’m a bit surprised they let the cat out of the bag early. Perhaps it’s to avoid pricing wars and let Vail know in advance they aren’t going to play that game, but I think this slow trickle of information is an interesting approach that I hope won’t lead to a sad trombone kinda roll out on March 6.

Early thoughts, but will report back once they simmer a bit.

Whenver stuff like the a new pass drops, I have to give myself a couple weeks to process it. That time has passed, so here’s an update.

First, I’ve mostly forgotten about the “K” which I figured I would. That’s good news.

Second, their Instagram account gives us a few more tidbits into their brand and position than we get on the website thanks to the classic three-picture spans toward the bottom of their feed. 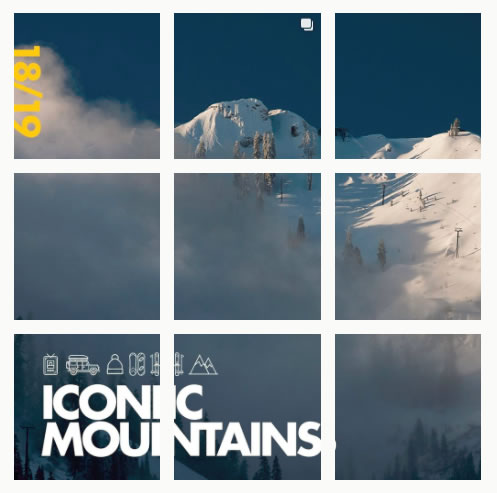 …but two more show up as well: 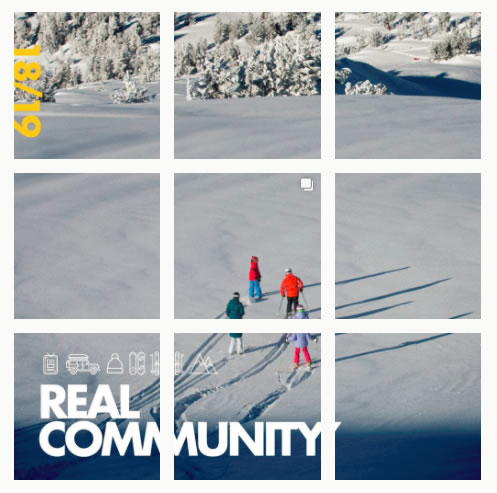 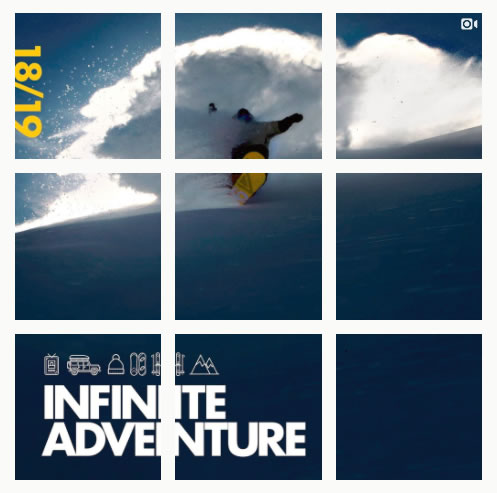 I’ve been getting hints that the brand’s position will be built around the unique character of each resort in contrast to Vail’s perception of one-size-fits-all / cookie-cutter and the “community” angle hints that vibe may be correct.

Third, my only concern with that is how widespread the perception actually is. For example, take an industry insider or deeply passionate skier and you’ll find someone who has followed skiing business, has perhaps read Downhill Slide, and sees Vail Resorts’ mountains as the epitome of soulless. You’ll also likely hear some reference to “faux alpine villages”, etc.

But I’ve actually never heard these sentiments outside of a very tight group of ski industry voices. Instead, the destination skiers I’ve talked to love those resorts and villages and vibes.

I like the position and I’m guessing on a few layers here given how much info is public, but I’m just not sure how strong this direction could be in the market.

Fourth, the three-picture spans on Instagram are a reminder that once you go down that path, it’s tough to stop. If you look at the timestamps on their last 9 posts you’ll see why:

Posting in threes works pretty well for Ikon given how many mountains they have to talk about, but it can be tricky road to go down for those without the volume of content or time/people to manage.

Overall, though, I’m liking what I’m seeing and I’m excited for the first couple weeks of March when the real hammers drop (like price and, I’m guessing, yet another move from Vail besides the Telluride news).

Get ready to check another mountain resort off your bucket list: @Telluride is officially joining the #EpicPass. Press Release | https://t.co/6DPJSNl5sB pic.twitter.com/2vHwJDnfUf

Vail has Vonn and Ikon has Shiffrin. I’ve always liked that Mikaela has managed to keep her personality during her rise and, while her dominance is more “iconic” in this context, that probably plays into Ikon’s messaging as they position themselves against Vail’s more systematic approach to resorts and marketing.

With the FAQ section of the Ikon Pass website stating that “the M.A.X. Pass will not be available for winter 2018/2019” I figured it’d be a good time to get things straight given 64 different resorts have been involved in one of the three.

Also, love this analysis from Peter at LiftBlog regarding lifts. On which Ikon clearly has an advantage.

The Twitter account is no longer private and is now sharing content making me think that today was supposed to be the official launch and that video board ad may in fact have been an error. Either way, a video kicks it off:

Followed by a map of all the resorts: 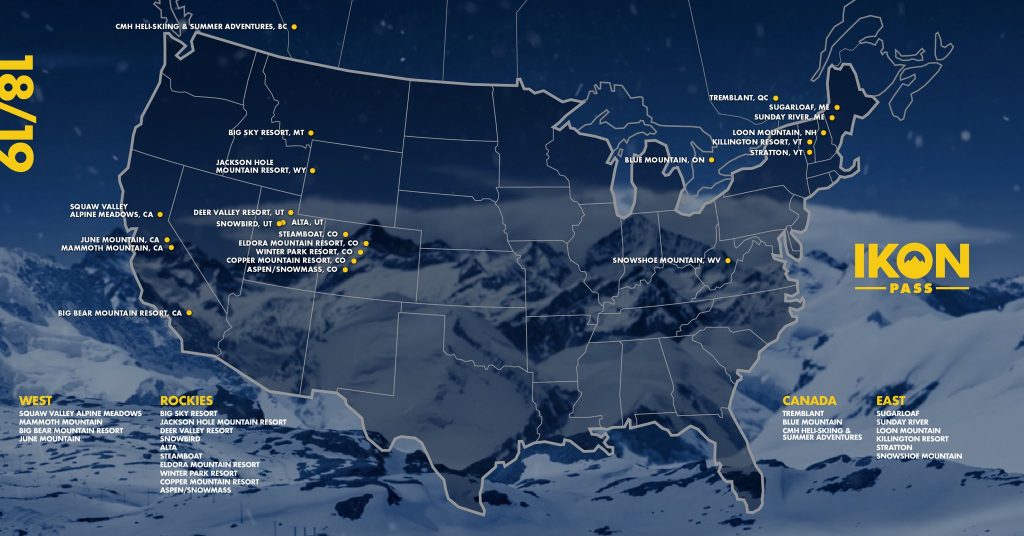 Listed out, here’s what we’ve got:

Some of those names came as a bit of a surprise, but in the FAQ’s they state that:

Looks like we’ll be taking at least a short break from acquisitions. In the meantime we can follow the pass’s new social accounts:

I like the branding, the colors are good but surprisingly close to the EpicPass (yellow + blue vs orange + blue). Lots still to learn and the price will be a bit part of that.

Still hung up on the K but not as much as yesterday. Progress. :)

Also starting to see resorts reach out with Ikon-created content on their own channels.

We're proud to be part of the @IkonPass for the 18/19 season, the new standard in season passes. #WeAreTheMTNs pic.twitter.com/WwwE1UVVQG

A bit of an odd way to hear about the pass, but The Denver Post’s Jason Blevins tweeted about it first by sharing this video board from SIA/OR in Denver.

Soon after, Ski Big 3’s Chris Lamothe shared a picture along with the twitter handle (@ikonpass) he had tracked down. 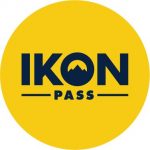 At the time, the Twitter handle was still private (which made me think that, perhaps, the video board was not supposed to show what it did when it did) but we did get a first glimpse of the logo.

With the Twitter handle, we got a first look at the tagline which helped clarify the use of “Ikon” in the name as “iconic” seems to be setup as the key, central word in the brand and messaging.

The most iconic mountains in North America. A new standard in season passes.

Not sure how I feel about the K in Ikon (kinda reminds me of the apartment complex my friends lived in during college named Kampus Korner) but like all things, will probably get over it.